Some Facebook users in the United Kingdom (UK) may be getting ready to put that rumored “dislike” Facebook button to use: the social media site paid just £4,327 ($6,643 US) in UK corporate tax in 2014. 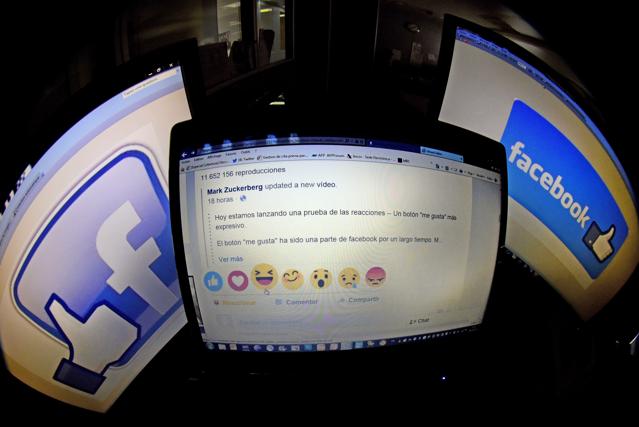 A picture taken on October 9, 2015 in Madrid shows a computer screen displaying the Facebook webpage with the new ‘Reactions’ options as an extension of the ‘like’ button, to give people more ways to easily signal how they feel. Facebook will begin testing this new feature allowing users in Ireland and Spain to express a range of emotions on posts starting today, but there will be no ‘dislike’ button, the social network said. AFP PHOTO / GERARD JULIEN (Photo credit should read GERARD JULIEN/AFP/Getty Images)

Here’s the catch: while revenues are up (with mobile ad sales in particular), Facebook claims that it made very little profit in the U.K. It’s not that there aren’t Facebook users in the UK – there are. More than a third of the UK population pops over to Facebook every day (according to 2013 data) to like, share and emoticon up a storm. By the end of the year, Facebook had reported more than three times the user count of its social media rival, Twitter.

However, in the UK, as in many companies, corporate taxes are calculated on profits. Profits are very different than revenues. Even when revenues are up, profits can be down. And that’s what Facebook claims happened. The company actually claimed a pre-tax loss of £28.5 million ($43.7 million US). Despite the “loss” it paid its UK staff more than that, or £35.4m ($54.28 million US), in bonus money.

Other expenses also whittle away those profits on paper, resulting in a lower tax bill. It’s what you and I do – just multiplied by millions.

We are compliant with UK tax law, and in fact in all countries where we have operations and offices. We continue to grow our business activities in the UK.

That doesn’t mean that everyone is happy about it. Corporate taxes have been a controversial topic in the UK for the last several years. Starbucks became the focus of public indignation in 2012 when it was revealed that over a period of more than 10 years, the company only paid a total of £8.6m ($11.5 million US) in corporate income taxes. Initially, the company cried poor, citing that it had only made a profit in one of those years but later admitted to shifting royalty and other intellectual property income to tax-favored Netherlands. Kris Engskov, Managing Director for Starbucks in Britain and Ireland, eventually announced that the coffee retailer would pay more in tax than it “has” to in order to appease angry consumers.

Similarly, Google was alleged to have generated $18 billion in revenue from the U.K. over a five year period beginning 2006 and paid just $16 million in corporate taxes over that same time frame, a .09% tax rate (less than a tenth of a percent). Like fellow tech company, Apple, Google used a “highly contrived” and controversial subsidiary in Ireland to lessen its tax burden. Like Facebook, Google claims that it’s in the right,saying at the time, “As we’ve always said, Google complies with all the tax rules in the UK and it is the politicians who make those rules.”